Deep down into Ruakuri Cave at Waitomo

Journey deep down the spectacular spiral entrance of Ruakuri Cave to see glowworms and extraordinary limestone galleries which will take your breath away.  Don’t miss the uniquely sustainable caving experience.

A solar powered cave, Ruakuri Cave is accessible to everyone with a fully wheelchair and pushchair accessible walkway.  Photography and video are permitted in selected areas of the cave. The tour starts with a walk through the spectacular spiral entrance way as it winds 1.6 kilometres down into the depths of the cave. Stunning limestone formations, fossils and crystal formations are part of your caving experience. You will see examples of shawls, stalactites and stalagmites and flowstone.  The thunder of subterranean waterfalls can be heard in the distance as you watch as the Black Water rafters bob along the river below on giant tractor-tyres.

Meara was our tour guide and shared information about the history of the caves, her people and the glowworms.  She spoke about her connection with the caves as a Maori woman and shared some interesting cultural stories. The History of Ruakuri Cave

According to Maori legend, Ruakuri Cave was first discovered 400-500 years ago.

Tane Tinorau, Chief of Kawhia, took a war party to attack the local Ngati Hau Tribe to gain land in the Waitomo area.

A hunter was sent to spear birds for food and discovered the entrance to the cave which was occupied by a number of wild dogs. The wild dogs attacked the hunter who dropped his catch and fled.

Later, traps were set by the war party to capture the dogs and they were killed and eaten.  On the success of his attack the Chief took his people to live near the cave.

The cave entrance was used by Maori as a burial ground and is now a sacred area and protected by the spiral entrance.

First opened to visitors in 1904 by James Holden, one of the first settlers to the region.  The family still owns much of the land above the cave system.

The Government claimed ownership of Ruakuri Cave until a legal and financial dispute forced closure in February 1988.

What are Glow Worms? Known as New Zealand glowworm, the Arachnocampa luminosa (Skuse, 1891) is a species of fungus gnat, native to New Zealand.

The larval stage and the imago produce a blue-green bioluminescence.  As they fish for food, glow worms create a breath-taking sea of starry lights. Glow worms build ‘snares’ made of silk fibres coated with mucous. The snares consist of tubes in which the glow worms are suspended.  These long, hanging filaments are coated in sticky beads of mucous.

The glow worms emit a pale light which attracts insects toward the sticky threads of their snare. The snare usually catches small bugs such as midges, but insects as big as cockroaches can also be trapped.

Things to do in Waitomo A visit to Waitomo Caves is one of the must-see natural attractions in the North Island of New Zealand.  Thrill-seeking adventures such as black water rafting, abseiling and rock climbing can be a part of your caving experience.

Discover adventure in the original Black Water Rafting trip on the Black Labyrinth.  This is truly a unique caving tour offering the chance to weave, jump, climb, and float through a sparkling glowworm wonderland.  It’s an extraordinary experience and an amazing fun adventure.

Zipline through a gallery of glowworms and climb underground waterfalls as you push your limits with this unforgettable adventure.  Descend into the seemingly bottomless depths of Ruakuri Cave before zip lining through the glowworm gallery on this exhilarating adventure.

The award winning Waitomo Caves Discovery Centre is new New Zealand’s only Speleological Museum.  It contains everything you need to know about caves, cave creatures, and the history of caving in New Zealand.

As an interactive display, you can crawl, climb and squeeze through the ‘cave crawl’, cracks and squeezes throughout the Discovery Centre.  It also houses a significant collection of fossils. Visit this loop walk to see a display of glowworms.  The loop walk also showcases natural limestone cliffs that Waitomo and Ruakuri Caves are famous for.  Although the walk only takes 45 minutes to complete, allow extra time to take photos and enjoy the nightscape.  Tip: Take a torch.

This trail begins opposite the Waitomo Caves Discovery Centre.  Get a view of Waitomo’s spectacular limestone formations from the lookout.  This is a 2.5 hour hike, which connects with the Ruakur Bushwalk for an extended hike.

Drive down Te Anga Road to do the loop walk (about 20 minutes) to reach the Natural Bridge.  The Natural Bridge is a spectacular 17 metre limestone arch where you will find fossilised oysters in limetone outcrops.

Just past the Natural Bridge are the Marokopa Falls. A 10 minute bushwalk from the Te Anga Roadside takes you to a viewing platform overlooking the falls.  The waterfall stands 43 metes above and is often described as one of the most spectacular waterfalls in New Zealand.

Another charming town near Waitomo is Te Juiti, the Shearing Capital of the World.  Visit the giant Shearing Statue on Highway 30.  It’s also a great place to base yourself if you’re interested in cycling the Timber Trail following a of path of old logging roads and tramlines.

Where to stay in Waitomo


Put Ruakuri Cave on your to-do list when next in New Zealand.  Pin this. 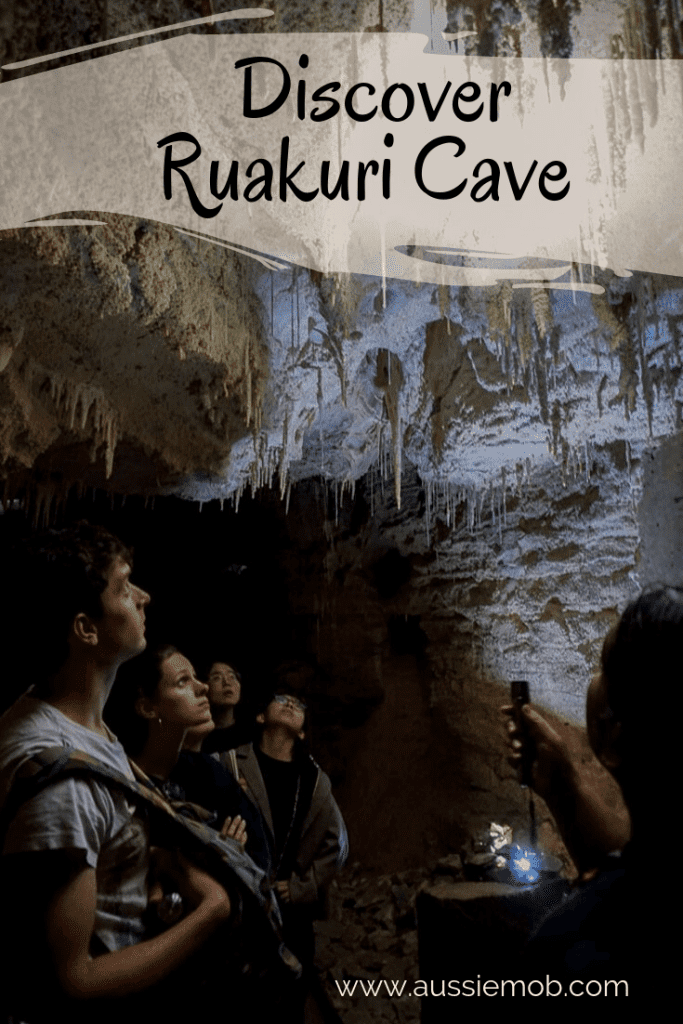 Where else can you find Glow Worms in New Zealand?

The roof of the cave is often a breathtaking sight dotted with brightly glowing lights like a sky full of twinkling stars.

Glow worms can be predominantly found in New Zealand and Australia where they live in caves and on sheltered banks in native bush where humidity is high.

The Arachnocampa luminosa glow worms survive by spinning a silk nest from the ceiling and lowering a thread down to fish for their prey.

During the day they are inconspicuous, but in the darkness these luminescent larvae sparkle, dotting caves, tunnels and walkways with blue-green luminescence.

Waitomo Cave systems are possibly the best place to spot glow worms. On New Zealand’s North Island, visitors will venture 150 feet underground to see hundreds of thousands of these shining insects lining the ceilings of the 30 million-year-old limestone caves.

The Te Anau Caves are located on the South Island about a two and a half hour drive from Queenstown. The tour commences with a cruise across Lake Te Anau before leading visitors through the narrow passageways and into the glow worm grotto. The small boat glides through the caves during the day or night, allowing visitors to view the spectacular sparkling ceiling.

Enter a small sea of glowing lights on an evening walk in Hokitika’s Glow Worm Dell. Glowworms can be found here all year-round.  Enjoy a moment of silence under the brilliant glowing canopy, this site is off the tourist trail, so it’s likely you won’t encounter large crowds. Just remember not to shine your lights on the insects.

Visit this centrally located garden in the capital of New Zealand for a fantastic look at glow worms without leaving the comforts of the city.  See the glow worms located on the overhanging banks along the Pukatea Stream.  Check the events calendar to see if any guided tours are running.

Enjoy a 20-30 minute walk through lowland rainforest to the beautiful glow worm grotto of Fox Glacier. Throughout the walk, you will see forest trees, ferns and mosses before seeing the glowing lights from above.  Minnehaha Walk is free of charge and is suitable for families and wheelchair access.

Always take the most from your experiences

With so much to do in New Zealand we tried to experience as many different things as possible.  Walks in the Kauri forests, Cape Reinga, the cultural experience at the Waitangi Treaty Grounds, Hobbiton and the beautiful Napier wine region.

Read more about our adventures in New Zealand

Our experience at Ruakuri was unexpectedly breath-taking.  We’ve seen glowworms and underground caves many times before, but the Ruakuri Cave experience was quite different.   The passion of our guide and her wealth of knowledge that has left Ruakuri forever imprinted in our memory.

Have you done the Ruakuri Cave at Waitomo yet?  It’s one to put on your list as it’s uniquely informative.  What did you love most about the tour? Explore the Bay of Islands in New Zealand Have you visited the Hobbiton Movie Set yet?

Are you checking your goals off your Bucket List?

15 Unique Places to visit in Australia

What do Aussies love about Australia?